More than just a plan

A cone-shaped grinding bit after drilling holes in PVC pipe.

The PVC Loom book contains a lot of details and recommendations for how to build the loom.  I’ve seen several plans for sale on eBay, but they are little more than diagrams with dimensions.  I have included a lot of suggestions that not only make construction easier, some of them also help keep costs down.

For example, the Action Board is attached to the PVC frame using 2 large 3/4″ dowels.  I found that 3/4″ drill bits are VERY expensive starting at about $15.00.  I thought that was a bit much for something you would only use to drill 4 holes.  So, I found another solution. 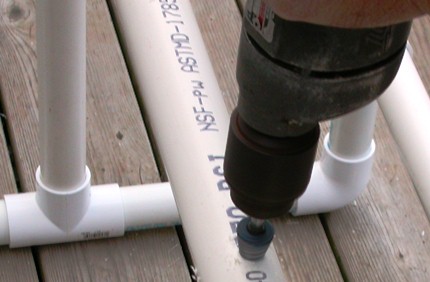 You can also see in the photo that the PVC Loom Frame is being used as it’s own workbench.  The frame tubes were dry-fitted together to make drilling the holes much easier.  This is just one of over 210 photos and diagrams to be found in the book.