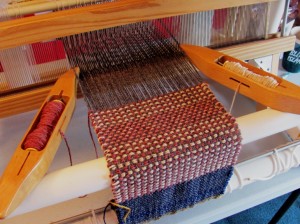 While testing the PVC Loom in preparation for the final release of the book, I decided to experiment with hopsack.  This draft is not used much, but offers a lot of contrast and pattern variation with little effort.  With hopsack, the weft is put through the shed two or more times to create bars of color.  The warp threads are also used in groups of two or more.  I used pairs of warp threads, but used two and three passes of weft in the sheds.  I often wondered if this would somehow feel loose or disconnected.  But the resulting cloth is just as sturdy as any other draft.

I varied the colors in some of the blocks of hopsack creating red-white-red color bars.  Here is a closeup of the weave.  Click on the photo below to enlarge. 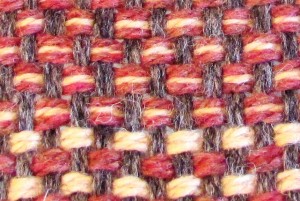 I used two shuttles, one for each color, to create the color patterns.  I also used a floating selvedge since pairing the warp threads can leave large areas of warp hanging with little support.  The floating selvedge gives the weft something to grasp, and also gives the finished cloth a nice straight edge.

This entry was posted in General and tagged draft, how to build a loom, loom, loom building, PVC Loom, scarf, weaving, weaving draft. Bookmark the permalink.